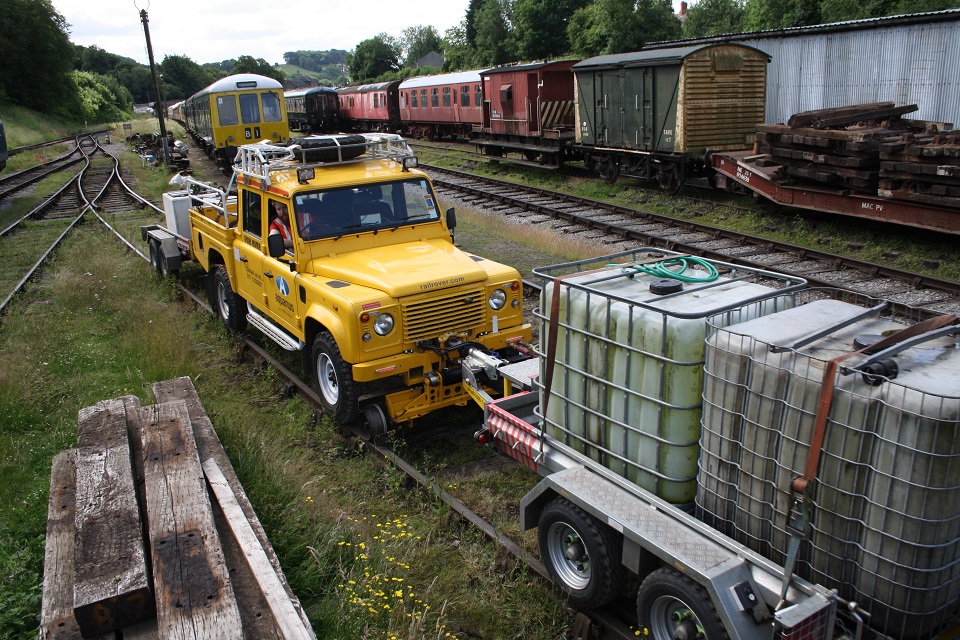 Hot off the press and captured in the photo… testing only happened yesterday and Engineering Acceptance Certificates are to follow.. but we are very excited!  Our Road2Rail 4x4s can now transport 6.2 tonnes on track.  That is 800kg for personnel in the R2R4x4, and a further 2.7 tonnes front & back on two R2R Plant Trailers.

The Aquarius R2R4x4s have a reputation for being a reliable, safe, efficient way to transport personnel and tools from Road to Rail to Site.  Now you can transport so much more.  The R2R Plant Trailers have been in service since September 2014.  They can be utilised to transport tools and materials for fencing projects, welding, maintenance and track renewals.  Rubber tracked plant such as wood chippers,  cranes, excavators and cherry pickers can be transported too. Personnel are transported as part of the package giving you a self sufficient solution.

The R2R4x4s and R2R Plant Trailers are available for hire now; with the double R2R Trailer rig being available in the next couple of weeks… watch this space.

Network Rail, Wessex Receives the First of Its RRVs

In early March Network Rail in Wessex received the first of its vehicles a Land Rover RRV with a Load Tray Extension (LTE), and later...read more →

If you had been on our socials last week you would have seen the various posts about Aquarius Rails support on #WhiteRibbonDay (25th November 2020). ...read more →