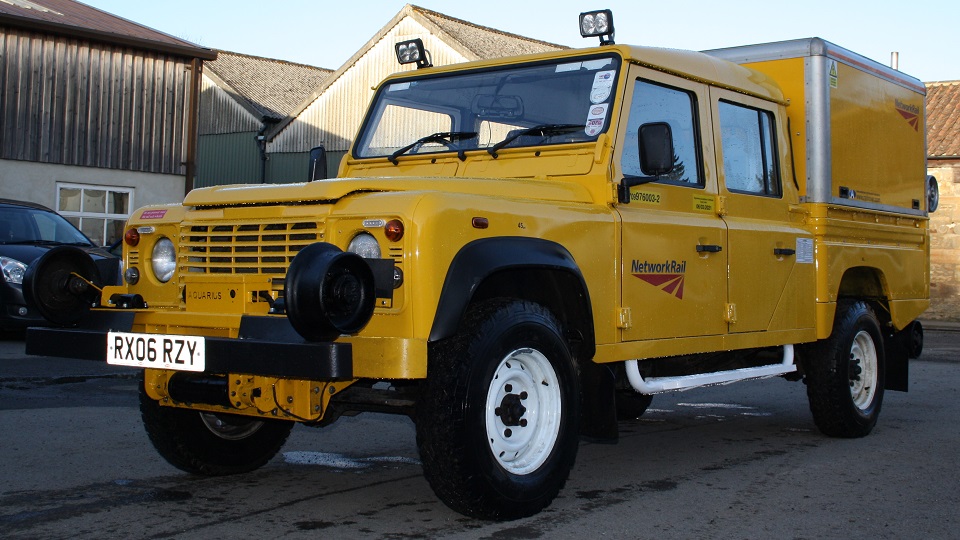 In early March Network Rail in Wessex received the first of its vehicles a Land Rover RRV with a Load Tray Extension (LTE), and later received 2 Weld Truck RRVs.  This vehicle was overhauled in the Aquarius workshop.  The work included new 7 year Engineering Acceptance Certificates to RIS 1530 issue 4, re-spray to yellow bodywork with Network Rail decals, and the fitting of hand wash units and reversing cameras.

The Land Rover RRV and LTE is utilised by Network Rail to deliver staff and materials in an efficient and safe manner avoiding the costly, time consuming inefficient and often dangerous process of staff pushing trolleys to work sites.     The payload of this vehicle is 1050kg which allows 5 persons (80kg each) in the cab and 480kg of equipment in the rear.  The vehicle is also certified to tow and propel Load Tray Extensions (LTE), a two wheeled trailer which transports 490kg on rail.  With this device the gross payload of the Land Rover RRV and two LTEs is 2030kg.

Abi Broadley our Marketing Manager,  has been promoted to Business Development Director. In her new role Abi is responsible for marketing and sales, developing new...read more →

An Aquarius Rail Ranger has been purchased by Network Rail in Helmsdale, Scotland.  The vehicle underwent an overhaul that included painting to Network Rail yellow...read more →