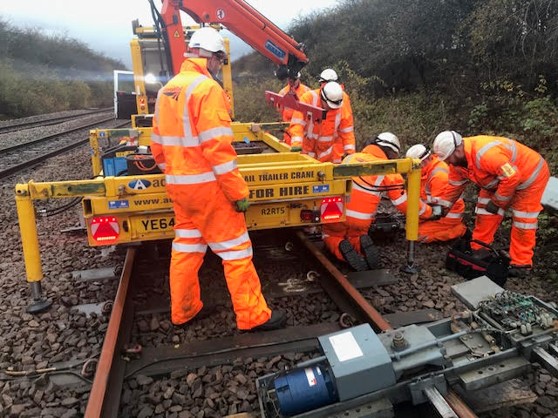 The tried, tested, and trusted Aquarius Rail Road2Rail4x4 has been specifically designed with time efficiency in mind. From road to rail to site the R2R4x4 is the obvious choice when responding rapidly on the railways.

Despite being a tough 4×4 the Aquarius Rail R2R4x4s are incredibly flexible meaning they are readily adaptable to many applications on rail and off-road duties. With up to 1 tonne payload within the vehicle and a high rail speed of 20 mph and 15mph reverse, easy on and off tracking thanks to huge ground clearance and can travel, work and on track under live OLE the R2R4x4 is unparalleled either as a personnel or tools/materials carrier for rapid response.

The R2R4x4 is often coupled with the Road2Rail Trailer. The R2R Trailer offers an additional three tonne payload on rail, can travel at 10mph on plain line and with loading area dimensions of 1.95m wide x 3.25m long can easily transport anything from sleepers to fallen tree branches.

“Working in the remote Scottish Highlands we have very few access points. Sometimes 15 miles away from the work. We utilise the R2R4x4 which allows us to do our boundary and vegetation inspections far quicker and far safer. When we receive call outs, we must respond immediately to all manor of things, fallen trees, animal incursions and line proving etc. The R2R4x4 allows us to respond far quicker as it takes just 2 minutes to on track at any RRAP. Due to its size we can easily on track at small user worked level crossings also”.

Head of Maintenance Delivery at Network Rail Ian Puckrin has informed us of a number of times where the R2R4x4 has been used in anger for flood reconstruction.

“Flooding had led to a points machine needing to be replaced quickly as it was preventing a train full of coal reaching a local power station. Utilising the R2R4x4 & R2R Trailer Crane Attachment, the flooded points machine could be replaced rapidly and coherently meaning there was no significant power shortage in the local area.”

Different disciplines at Leeds use our R2R4x4 & R2R Trailer to rapidly respond to a variety of different railway complications. S&T Section Manager, Leeds Signals Team, Andy Davies gave us an account of when they needed to rapidly respond:

“There was an emergency power cable issue on the line between Leeds and Doncaster. It was a four-hour possession time, but the task required 1000 meters of cable to be installed. Normally this is quite a laborious process and it involves many systems; getting the vehicle to site as close as possible, loading the cable on to a trolly and manually pushing down the side of the track with as many as eight or nine people feeding the cable off into the troughing where it can be positioned.

With the R2R4x4 & R2R Trailer, they on tracked, drove down the line to the work site with 1000 meters worth of cable loaded, fully unloaded it into the troughing within 45 minutes and then off tracked.

This work was all executed with an hour spare of the possession time. Without the R2R4x4 & R2R Trailer the amount of cable required to be laid would never have been done in that amount of time making rapid response a very real possibility from road to rail to site.”

For more information on how Aquarius Rail can make every second count, email: ben@aquariusrail.com, or call: 07771 117988