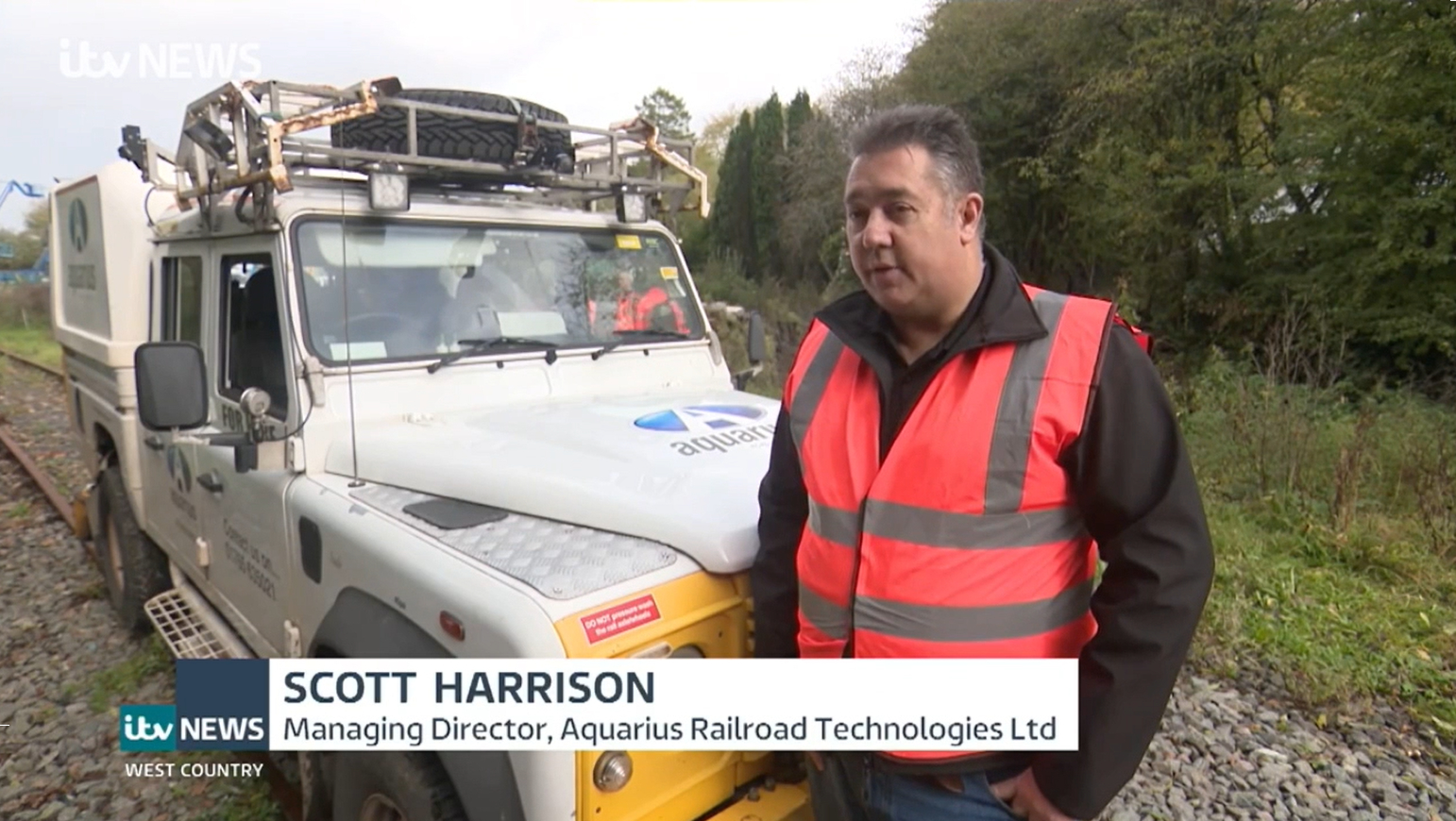 Network Rail is helping keep train services in Devon running reliably this autumn, by banishing the issue of leaves on the line.

With the help of a specially adapted Land Rover designed to travel on rails and on the road, troublesome leaf mulch could be a thing of the past on Devon’s railways.

The vehicle, known as a Sand Rover, is being deployed this autumn on Devon’s branch lines following a successful trial which saw an average reduction of 80% in delays as a result of leaf fall on the tracks.

Owing to specially mounted wire brushes, the Sand Rover – designed by Aquarius Railroad Technologies Limited – sweeps slippery leaf mulch off the rails as it travels. It also applies a citrus-based treatment to the track, further helping to break up any sticky leaves, as well as coating the rails with dry sand which helps trains to grip the rails in the wetter autumnal weather.

Each autumn, thousands of tonnes of leaves fall onto the railway and stick to damp rails. These leaves quickly break down into a slippery layer which acts like black ice on a road and makes it difficult for trains to stop quickly. This can cause trains to overshoot signals or platforms and means that train drivers have to accelerate more slowly, causing frustrating delays for passengers and freight customers.

During autumn 2020 Network Rail trialled the use of a Sand Rover on the Tarka line (which runs between Barnstaple and Exeter), resulting in an 87% reduction in delays caused by fallen leaves when compared with previous autumn seasons.

Last autumn, Network Rail widened the scope of the trial and the Sand Rover was put to work on the Dartmoor line (which runs from Exeter to Okehampton) too, with the equipment working in each area on alternate nights.

The lines were specifically chosen owing to their locations – they both experience a high volume of leaf fall and are not accessible by the traditionally used rail head treatment trains (RHTTs), which use high-pressure water jets to clean the tracks.

Across both locations, there was an observable drop in delays – an average of 80% fewer delay minutes when compared with the three prior years.

This year the Sand Rover will be back in action across branch lines in Devon, complementing several other activities to keep the railway lines leaf-free including using RHTTs and traction gel applicators, which provide adhesion in key areas.

Network Rail’s Western route, which runs from Cornwall to Paddington, utilises four RHTTs, with one based at St Blazey in Cornwall that works to clear 340 miles of track across four counties – Devon, Cornwall, Somerset and Wiltshire. The train is used each night between 6 October and 6 December every year and is backed up a team of specialist staff who receive frequent weather reports and information from rail staff on the ground to target problematic areas for leaf mulch removal.

Three other RHTTs are based across the route – one in Didcot that covers the Thames Valley area and two in Swindon; one for the Cotswold area and another that travels all the way to Cardiff and the Welsh Valleys via Bristol. In total, the four rail head treatment trains are responsible for keeping almost 2,000 miles of track free from leaf fall mulch. Similar measures are in place across the entire country, with the nationwide fleet of leaf busting trains treating around 1.04 million miles of track each autumn, equivalent to travelling to the moon and back twice.

“Our successful trial of the Sand Rover on the Tarka line in 2020 and Dartmoor line last year significantly reduced autumn-related delays for our passengers, which is why we’re fully utilising it this year to combat leaf fall.

“The Sand Rover is ideal for use on branch lines in Devon that see high leaf fall levels and allows us to proactively concentrate on specific areas and treat them quickly at the touch of a button from the cab of the vehicle.

“This year we’re pleased to be using the Sand Rover again at night when the trains aren’t running, with its proven track record of delay reduction. We’ll also be using our special treatment trains across Devon and Cornwall to clean the rails throughout autumn and our teams will be ready to respond to any issues that arise to minimise any delays for passengers.”

“We’re delighted that the Sand Rover has been so successful for the team in Devon.

“We understand that seasonal weather can be a real concern when trying to keep tracks safe for rolling stock, and ensuring a seamless service is of the utmost importance to Network Rail and operators alike.

“Sand Rovers are available for deployment across the UK, and we are proud to report that they can access even the hardest to reach areas of track. If a leaf can fall there, a Sand Rover can get there!”

Leaves on the line – why is this significant? Leaf fall in the autumn has become a perennial problem. There are 10 million trees next...read more →